Immediately following the performance of ‘Comedy’ there was a round-table discussion that explored many of the themes and ideas arising from the play and the wider thought of Kazantzakis. 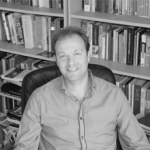 A leading academic on the work of Kazantzakis

Lewis Owens has spoken at various conferences and has been interviewed in the media in the UK and US for his views on UK higher education. He has a particular interest in Philosophy, Religion and the Arts and was awarded a PhD from Cambridge University (Queens’ College) in 2000 for his work on the Greek writer Nikos Kazantzakis. Lewis subsequently taught and supervised undergraduate students on various papers in the Faculties of Divinity and Philosophy at Cambridge University. As a result of grants from the Faculty of Divinity, Cambridge, Lewis was the first scholar to examine Kazantzakis’ personal library in Iraklion, Crete. His research resulted in numerous conference papers and articles in peer-reviewed journals, as well as the critically acclaimed book Creative Destruction: Nikos Kazantzakis and the Literature of Responsibility (2002).

In 2003, shortly after being appointed Lecturer in Philosophy and the Arts at Canterbury Christ Church University, Lewis was also appointed the inaugural President of the UK branch of the International Kazantzakis Society. During this time Lewis arranged and chaired the first International conference on Kazantzakis to be held in the UK, with speakers from Australia, USA and Europe. Lewis has spoken at many leading Universities in the UK, US and Australia, where he was a key-note speaker on Kazantzakis at the University of Sydney in 2004. Lewis was recently (Feb 2013) a main speaker at an International Symposium on Kazantzakis held at Kings College London, where he spoke on ‘Kazantzakis and Mahler’. He has recently interviewed Rowan Williams, former Archbishop of Canterbury and current Master of Magdalene College, Cambridge, on Kazantzakis’ The Last Temptation of Christ’. Lewis’ company, EdmissionUK, have recently made a donation to the Society of Modern Greek Studies in order to support continuing research in this area as well as providing conference grants for postgraduate students in the field of Hellenic Studies.

Roderick Beaton graduated from Cambridge with a first degree in English Literature and a PhD in Modern Greek. He came to King’s in 1981 as Lecturer in Modern Greek Language and Literature, and in 1988 was appointed to the Koraes Chair. For ten years he headed the Department of Byzantine and Modern Greek Studies (whose functions since 2010 have been taken over by the Centre for Hellenic Studies). He has been actively involved with the Centre since its establishment in 1989 and with the Comparative Literature programme.

From October 2009 to September 2012 he was appointed to a Major Leverhulme Fellowship, and during autumn 2010 to the Visiting Fellowship of the British School at Athens. During this period he carried out research for his forthcoming book, Byron’s War: Romantic Rebellion, Greek Revolution, to be published by Cambridge University Press in 2013. He is also Chair of the Academic Committee overseeing the International Byron Conference which will be held at King’s from 1-6 July 2013.

Originally from Nottingham, England, Darren J. N. Middleton is Professor of Religion at TCU, where he has taught classes in theology, religion and the literary arts since 1998. He earned a bachelor’s degree from the University of Manchester, England; a master’s degree from the University of Oxford, England; and, a doctoral degree from the University of Glasgow, Scotland, on Kazantzakis and process theology. He has published widely, offering studies on Kazantzakis, Graham Greene, Rastafarian dub poetry, John Updike, postmodern theology, literary pilgrimage, and West African Christianity. He has received several honors at TCU, including The Honors Program Faculty Recognition Award; Mortar Board Preferred Professor; and, the AddRan College of Humanities and Social Sciences Award for Distinguished Achievement as a Creative Teacher and Scholar. Besides research and teaching, he is an ordained Baptist minister, and he hosts adult Christian education workshops around the country.

Niki is the copyright owner of Nikos Kazantzakis’s works and Director of Kazantzakis Publications, the Athens based publishing house which publishes the books of Nikos Kazantzakis in the Greek language. She is also Director of Kazantzakis Publications Ltd, the managing company of the foreign rights of Kazantzakis’s works globally. Born in Geneva, Switzerland, the first home she ever knew was Eleni Kazantzakis’s home, a place filled with the manuscripts, furniture and photographs of Nikos Kazantzakis. Her godmother, Eleni Kazantzakis, named her ‘Niki’ after her beloved husband, and introduced her to Kazantzakis’s philosophy and works from an early age. Niki has delivered lectures on Kazantzakis in international conferences, and has been awarded by the University of Indianapolis for her research on the life and work of the great Cretan author. One of her research fields concerns the substantiation and discovery of the real people behind the immortalized characters in Nikos Kazantzakis’s books, for instance, the connection between Kazantzakis and his first love, Kathleen Forde, by identifying her as the Irish Lass of Chapter 14 of Report to Greco. Niki Stavrou has been Senior Lecturer of Comparative Literature at the University of Indianapolis Athens Campus and holds a Master’s degree in English Literature and two Bachelor’s degrees in Philosophy and Political Science.

Stephen Oswald has been acting, writing, directing, and evolving theatre and physical performance pieces for over 25 year and has formed both production specific and continuing theatre companies. Relocating from Edinburgh to London in 2011, Stephen trained for 2 years at The Poor School in Kings Cross before forming The Canting Crew to continue the strong working relationships he had forged in training.

A director familiar with both classical text and new works, his work has gained critical praise and a nomination for an Edinburgh Fringe First, and New Scottish Writing awards.